From Pontedera to the conquest of the world

Probably youngs do not know who but the tanks of memory that often the dads and the grandparents own exult of emotions just hearing the pronounce of his name. Alessandro Mazzinghi, boxer profession, his name has a huge value for the Valdera Region and all those that have left with the breath suspended during its Italian and worldwide boxing performances. His name has been the first one between the sons of this earth to be written in the history of the sport to the chapter "Champion of the World". How much has represented Alessandro Mazzinghi in the history of the sport can be explained just with this: champion of the world of the superwelter at only 25 y.o. in 1963 and once again in 1968 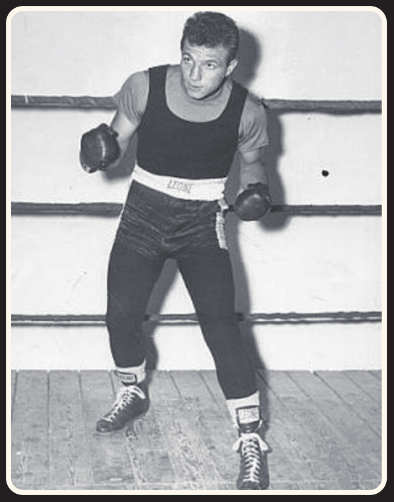 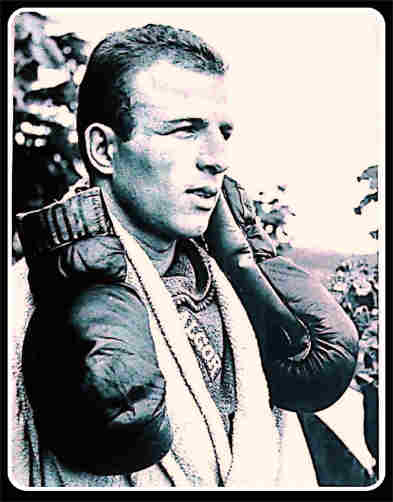 Guido Mazzinghi, older brother of Sandro, was also him an excellent boxer who distinguished himself distinguished both between the amateurs and the professionals, like medium weight in this last category. Guido Mazzinghi is born to Pontedera 14 May 1932; during his boxing career he has been the Italian representative at the Olympic Games in Helsinki in 1952 for the category of the heavy weights welters, Italian Champion amateurs always for the same category to Bologna in 1953 and and Champion of Italy in the professionals category in the medium weights from 1956 to 1958

Sandro Mazzinghi was born to Pontedera 3 October 1938 in via Roma, just in front of the Lotti's Hospital. His brother GUIDO (Glove of Gold of America, medal of bronze to the Olympic Games of Helsinki in the 1952 and Champion of Italy), older than six years, was the one who in the first post-war period lead it to the boxing, all unknown to the mother who never would have accepted the idea of having in house two boxers. With Guido he will have not only a brother but an optimal trainer and master in the more luminous years of its career. The first master of Sandro was Alfiero Conti, good person, old fashion man, that was working hard all the day and then was running to the gymnasium, that gymnasium which Sandro, then fourteen, did not know in to strike well the sack yet. It was exactly Alfiero an evening to take Sandro from part to tell him few but prophetic words: "Sandrino, if you find the courage to insist, have everything to become the champion of the world". Since that evening of the second half of the years '50 began to outline the marvellous career of the "Pontedera's Cyclone".

A sponsor for life

During all the course of his career an other rich man of humanity but above all fine connoisseur of champions has accompanied Sandro in climbing to the success: Giovanni BORGHI. He has been for Sandro like a father, for all his boxing career has sponsored him with the IGNIS, company of his property.Even nowadays his memory is living in Mazzinghi and between a story and the other, eyes make sheens travelling over again with the memory which has been and that it has meant for him Giovanni Borghi. 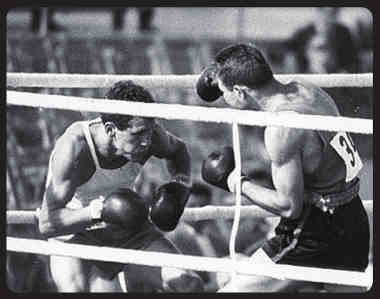 In 1961 in America, Sandro Mazzinghi conquest the crown of Champion of the Military World, for the category of the heavy weights welter. Little time after the Olympic Games of Rome, to which did not participate because it boasted a single presence in national, Sandro passes professional.

The curriculum of his first professional years is of whom they promise well: a long serial of victories for KO to testify the power of which its arms are made; irrelevant only one defeat against MELIS, Sardinian boxer close to the end of the career to which the possibility of still earning money it is given him before the definitive retirement

The great chance is placed in front of Sandro in 1963, only 25 y.o. and without never having fought for the Italian title. In the autumn of 1962 is made official the category of the superwelter, to the limit of the 69,853 kgs, the so-called 154 pounds at worldwide level. To the emergent number one is offered the possibility to fight against the American Ralph DUPAS, man of exceptional experience that had pulled up the belt to Dennis MOYER.

The 7 September 1963 to Milano Vigorelli Mazzinghi spreads Dupas to the ninth round! Now he is the Champion of the world! The revenge took place in December in Sydney, in Australia, since the rival owns the passport in that country and takes all the opportunities to get money with this citizenship.

To the thirteenth round Dupas is KO! Sandro is Champion of the World. Not there are more doubts: Italy has found a great boxer, in particular a beater able to take the people to the palace of the sport to be present at the "true" boxing. Sandro remains champion of the world until 1965, year in which the fate turns him the shoulders, strikes him not only physically but hits him also in the affections: an evening Sandro and the young wife after taking part in a dinner of gala to Montecatini, decide to get back soon. It rains cats and dogs, on the street toward home the car goes out of street and finishes its run against a tree. Mazzinghi is thrown outside and aided later a little by a group of boys that pass of there; the woman remains killed on the spot.

Sandro remains for some day in critical conditions, with a fracture to the skull. It seems that the beautiful fable must end, but Mazzinghi resumes and returnes on the ring in order to defend the title in Genoa against Tony Montano, put KO to the twelfth round and in Rome against Fortunato Manca to the points to the fifteenth round. Return to the ring

Although he is not in good shape from the physical point of view, the regulations of the Italian Federation preview that a champion of the world replaces in racing silk the title within six months from the previous match, and therefore Mazzinghi is forced to accept the match with Nino BENVENUTI; if Sandro had contested the challenge he would have seen take away the title as rule foreseen by the regulation.The match of the century was organised for the 18 June 1965, at least for what that regards national boxing.

To face this meeting Mazzinghi had many cares to restore him from the after effects of the car crash, for this must submit the first appointment in not completely ideal conditions; he does not nonetheless pervert the nature of his fighter born, giving battle since the first sound of gong. But the crucial blow is behind the corner and arrives to the sixth round! Doors however remain wide-open to the second match but BENVENUTI again wins, this time to the points, after Mazzinghi has "done" the match!

It's the 17 December 1965: it seems that the era of Mazzinghi to be finished within a couple of years, but how much those people have mistaken themselves who have supported this conviction!

The 17 june 1966 Sandro conquest the title for the European Crown of the Superwelter to Rome, putting KO to the twelfth round Yoland Leveque, title that it will then defend for four times in matches with boxers of highest level (Bo Hogberg, KO to fourteenth round; Jean Baptiste Rolland, KO to the tenth round; Wally Swift, KO to Milan to the sixth round; Jo Gonzales, KO to Rome to the quarter round). The moral is rebuilt, the fist is always that one of a time and it's easy to see it; and it's in this good period that Mazzinghi awaits the opportunity to take back again the belt of champion of the world. On the roof of the world

The opportunity not make attend a lot, the occasion in order to see realized his plan arrives the 26 May 1968 in Milan with the Korean champion Ki Soo KIM.

And thanks to the ability of Romolo Mombelli, metchmaker and head office print of the newspaper La Notte, and Vittorio Strumolo, president of the Società Imprese Sportive that succeed to give life to one of the more expensive and intense fightings of the Italian boxing, whose gestures still today are remembered with bright and present memory.

The San Siro soccer stadium seems that in field there are Inter and Milan for a derby-match. On the terraces 60.000 people are there to acclaim the Italian boxer, that after very intense fifteen rounds wins and the Asiatic is forced to give back the belt of Campion of the World! It's done, is the higher moment of the career of Sandro that once again gives an extraordinary demonstration of character and power to all those people that they have believed in him like champion and also to the sceptics that would have bet on his end. 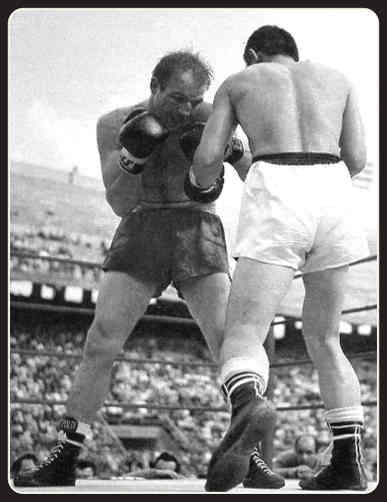 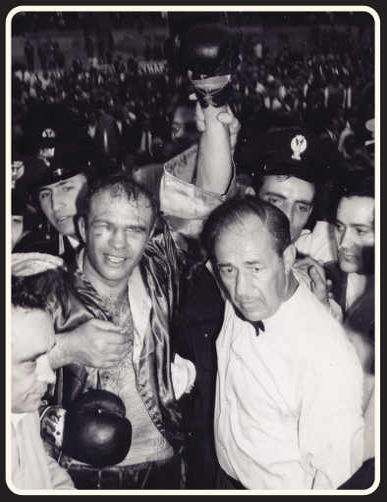 October 1968: Mazzinghi has 30 years, the weight of the battles of 15 seasons of career begins to be "heavy". The 25 October of the same year meets the Afro-American Freddie Little; it is an other hard duel, but the match ends when the Tuscan receives an incorrect hit to the right eyebrow obtaining a big wound. Match can not continue and the referee disqualifies the American, but the decision was then cancelled and assigned the "no contest". Few days later and the Italian federation takes away the title to Mazzinghi: it does not do the same the WBA, the worldwide organization of boxing instead.

campione del mondoDiscouraged and disappointed from the latest events Sandro decides to leave the world of boxing. It ends the splendid and inimitable career of the first person of Pontedera, without doubt the only one, still able to collect people around him just with his extraordinary enterprises, his spectacular victories, his atrocious disappointments, its genuine language.

Of Sandro Mazzinghi borns one every hundred years, I wonder if it will never arrive the next one!